By Roger Scott | For Southern Torch

SYLVANIA, Ala. — Sylvania used balanced offense and a stout defense to overwhelm Ohatchee 42-14 in a 3A, Region 6 matchup Thursday night.

The Rams piled up the points and yardage while building a quick lead over the Indians in the first half.

Sylvania’s first drive covered 70 yards in just over 2:30. Aiden Parham found running room behind the Rams’ line three times and caught a 22-yard pass from Jaxon Smith. Parham then punched it in from three yards out with just under 9:30 left in the first quarter. Conner Andrade’s PAT was good to give Sylvania the 7-0 lead.

The Rams’ defense forced a three-and-out on Ohatchee’s first possession.

On Sylvania’s next drive, freshman Landon Watkins gained seven yards around right end before Parham took it to the house on a 76-yard scamper. Andrade made the score 14-0 with 6:33 left in the first quarter.

After the kickoff, Sylvania’s defense went to work again as sophomore safety Josh Scott intercepted a pass from Ohatchee quarterback Bryce Noah and returned it to the 3-yard line. Two plays later Smith found Watkins for the touchdown with 4:50 left in the first quarter. After the PAT, the Rams led 21-0.

“Overall, we graded fairly well on the offensive side of the football, a lot of guys executed well and finished blocks up front,” said Sylvania head coach Tyler Vann.

“Our backs did a good job running the ball well… I felt like the things we did early kept [Ohatchee] off balance.”

“Defensively, our guys played pretty well. We stopped the run early and got up 21-0,” Vann said.

On its next drive, Ohatchee gained multiple first downs on the ground behind Noah and senior running back Devin Howell. Noah then bounced outside for a 20-yard gain early in the second quarter to move the ball to the Sylvania 9-yard line. Nathan Jones drove it in to give the Indians’ its first score with 8:09 left in the second quarter. The PAT was no good.

“The double teams did get to us late in the first quarter and second quarter and they were moving us up front a little more than we would have liked,” Vann said. “We’ve got to do a better job keeping the intensity the entire game on defense no matter the score and get to the ball and tackle better,” Vann said.

After the kickoff, behind Parham and sophomore receiver Roman McKeehan, the Rams quickly moved the ball into the Indians’ territory. Parham then scored his third touchdown of the night on a 23-yard run with 5:50 left in the second quarter. Andrade’s PAT gave Sylvania the 28-6 lead.

Ohatchee punted on its next possession with 3:00 left in the half, and Smith completed consecutive passes to Watkins, senior tight end Brant Kittle and McKeehan to move the ball to the Ohatchee 27-yard line. Scott hauled in a pass from Smith with :09 seconds left, but the touchdown was negated by a blindside block penalty. Sylvania held a 28-6 lead at halftime. 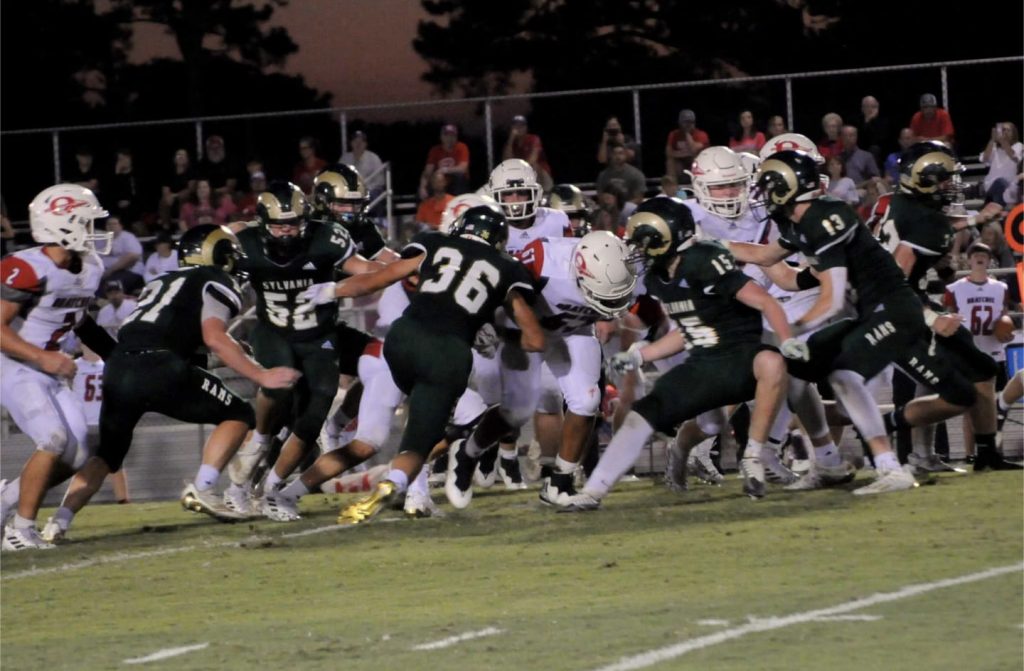 Ohatchee couldn’t move the ball into scoring position and turned the ball over on downs with its opening possession of the second half. Sylvania didn’t capitalize on the good field position, however, as Noah picked off Smith’s pass with 4:25 in the third quarter.

“We have to do a better job taking care of the football; we threw one interception on fourth down and we fumbled one in the end zone that Ky [Shankles] was able to jump on,” Vann said.

The Rams’ defense was solid again and forced another Ohatchee punt. Vann said he was pleased with how his younger guys are playing on defense.

“We missed some tackles, and some guys weren’t in the right spot, but that’s what happens when you’re playing a lot of young guys,” Vann said.

“They’re growing up and I’m glad to see them getting a lot of reps. It’s good experience.”

Watkins then took a short pass from Smith and sprinted 49-yards to the Ohatchee 5-yard line. Parham finished the drive with a touchdown, and Sylvania led 35-6 at the end of the third quarter.

“Special teams were really good. Andrade was a bright spot; he kicked the ball well. We lost contain one time on kickoff and we were perfect on extra points,” Vann said.

Ohatchee moved the ball in the fourth quarter and added their next score with 7:38 left in the game on a pass from Noah to Howell. Noah added the two-point conversion for the 35-14 score.

Scott recovered Ohatchee’s onside kick attempt, and Smith completed a 21-yard pass to Watkins to move Sylvania into scoring position. Parham got hit while crossing the goal line, and Ky Shankles jumped on the ball for the final Sylvania touchdown with 5:38 left in the game.

Sylvania’s defense forced another punt and the Rams ran out the clock on offense.

Sylvania finished with more than 450 yards of offense, with 249 coming on the ground. Smith finished 12-15 for 204 yards with one touchdown and one interception, Parham rumbled to 161 yards on 16 carries and four touchdowns, and Watkins had 97 yards receiving and a touchdown.