Sylvania’s Braiden Thomas (22) runs for the score against Madison Academy in the second round of the AHSAA playoffs.  Mandy Helton / Special to Southern Torch

MADISON, Ala. – It was a tale of two halves, defensive adjustments, and a series of spectacular plays for the Sylvania Rams in an overtime win at Madison Academy Friday night in the second round of the AHSAA playoffs.

“The offense did a really good job. We had a lot of yards, and our line did a good creating room for [Aiden] Parham and [Braiden] Thomas,” said Sylvania Head Coach Tyler Vann. “You should be able to win when you score 48 points in a game.”

Sylvania opened the scoring at 7:50 in the first quarter with a 34-yard scamper up the middle by sophomore back Aiden Parham. Conner Andrade’s PAT was good.

After the kickoff, Mustangs back Ken Cherry bounced outside for a 38-yard gain, and on fourth-and-one from the 4-yard-line Carson Creehan found Jackson Reece for the score. Neil Radak’s PAT was good for the 7-7 tie with 5:13 in the first quarter.

On Sylvania’s next possession, Mario Brewer, Jr. picked off Jaxon Smith’s pass, and the Mustangs scored on the next play. The PAT was good.

The Rams moved down the field behind the running back duo of Braiden Thomas and Parham, and Thomas finished the drive with a 40-yard touchdown run.  The snap on the PAT was mishandled, and the Mustangs led 14-13 with 11:51 in the second quarter.

On the Mustangs’ next possession, Judson Collins caught a bubble screen and broke through for the 54-yard score and the 21-13 lead.

“Defensively, not a very good job in the first half. We didn’t get lined up correctly early in the game, and they did a really good job up front against us,” Vann said. “They were able to create some lanes for their running backs, and we didn’t do a good job tackling.”

On its next possession, the Rams capped a 60-yard drive with a Thomas touchdown run of 32 yards. Sylvania tied the game with a two-point conversion from Smith to Landon Watkins with just over 8:00 in the half.

The Mustangs weren’t done with its first-half flurry of touchdowns, as Cherry had another long gain and then finished the drive with a 28-yard score. The Mustangs then stopped Sylvania on a fourth down attempt and tacked on another score just before halftime for the 35-21 lead. 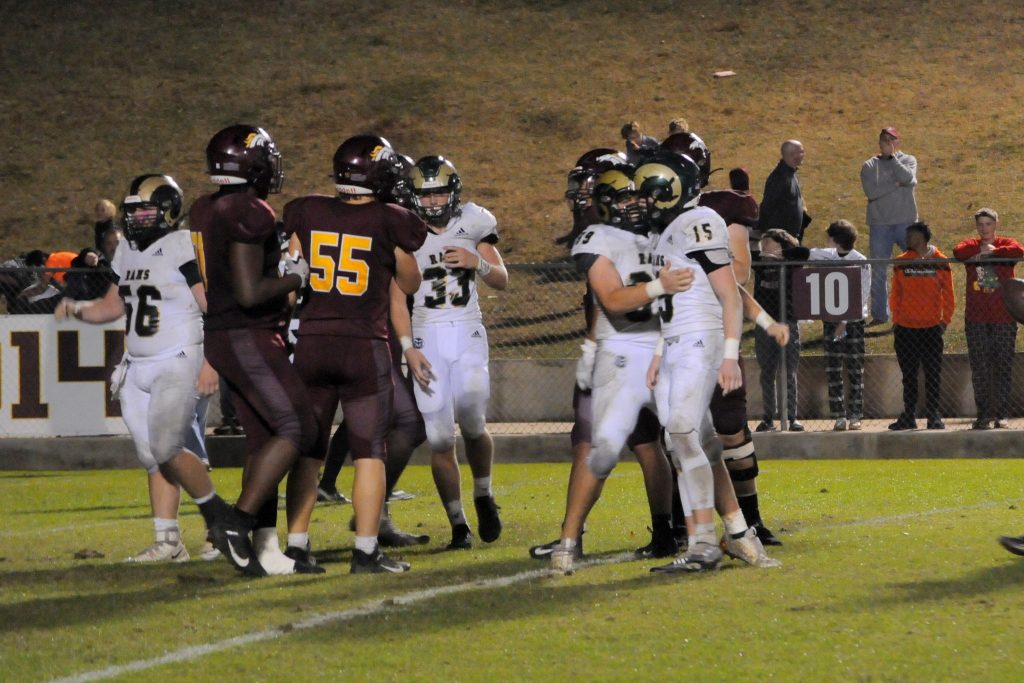 The Rams forced a three-and-out, Parham ran over a Mustangs defender for a big gain, and Smith completed a pass to Josh Scott to move to the 16-yard line. On fourth-and-1, however, the drive stalled on a mishandled snap.

Madison Academy took advantage of the mistake as the fourth quarter opened and drove the length of the field, scoring on a 28-yard scamper by Joshua Williams with 8:53 left in the game for the 42-35 lead.

Sylvania’s next drive ended on a tipped pass from Smith that was intercepted, but the Rams’ defensive pressure kept the team in the game by forcing another Mustangs three-and-out.

“We made some adjustments at halftime, and we were able to hold them to 10 points in the second half,” Vann said. “Really proud of how the defense played in the second half to keep us in the game and force them to drive the length of the field.”

After the punt, another big gain by Thomas was followed by Smith connecting with Scott for a 34-yard strike to move into Mustangs territory with just under 1:00 left, and the Rams capped the drive with another Smith-to-Scott connection for the touchdown. A penalty call on the extra point forced a re-kick, and Andrade booted the critical 35-yard extra point to tie the game at 42.

“Smith made some plays in the passing game, Scott went up and got the football, and Andrade was able to make the clutch extra point, which was huge,” Vann said.

Creehan led the Mustangs down the field with three completions to move Madison Academy into scoring position, but on second down, Scott leaped high for the one-handed interception with :13 seconds left to force overtime.

The Rams had gained the game’s momentum, and in the extra period, Creehan was sacked by freshman Travis Owens on first down. The Sylvania defensive backs knocked away the next two passes to force a field goal by the Mustangs.

On its overtime possession, Thomas bullied his way in from four yards out for the score and 48-45 victory that moved the Rams into the third round of the playoffs.

Sylvania will face Geraldine in an all-Dekalb County third-round playoff battle with the winner advancing to the semi-finals to play either Piedmont or Gordo.