SYLVANIA, Ala. – The Sylvania Rams relied on a strong running game and defensive pressure to advance to the AHSAA 3A semifinals with a 27-7 victory over Geraldine Friday night at Rams Stadium.

With the victory, the Rams advanced to the semifinals for the first time since 1994.

Geraldine, with momentum in its corner after upset wins over No.5 Winfield and No. 1 Mars Hill Bible, was trying to advance to the next round and avenge a 41-24 loss to Sylvania earlier in the season.

Senior running back Braiden Thomas found running room behind the Rams offensive line all night on his way to four touchdowns.

“He’ll be the first one to tell you that our o-line gets a lot of the credit for that.”

In a tight first half, Geraldine received the kickoff and was forced to punt on its opening drive. Sylvania advanced the ball to the Geraldine 7-yard-line before Jaxon Colvin recovered a fumble to regain possession with :58 left in the first quarter.

Geraldine methodically moved the ball down field on its possession, but failed to convert a fourth-down pass attempt. Geraldine’s defense returned the favor and forced a Sylvania punt with 4:14 left in the half.

The Bulldogs were moving the ball on a promising drive when it lost tailback Carlos Mann for the game.

Mann took a pass from Colvin and outran the Sylvania defense for a would-be touchdown, but he stopped and fell to the sideline with the non-contact injury with 2:35 left in the half.

When the game continued, Ashdon Cooley pressured Colvin and batted away a third-down pass, but Geraldine converted the fourth down attempt to keep the drive alive.

On the next play, Colvin and running back Caleb Hall muffed the exchange and Sylvania recovered the ball at its 34-yard line with 1:15 left in the half.

The Rams moved quickly behind two Thomas 15-yard gains, and Jaxon Smith found Landon Watkins for another 15-yard pickup. Smith got near the goal line on a quarterback keeper, and Thomas powered it in out of the wildcat formation for the 7-0 score after the PAT. 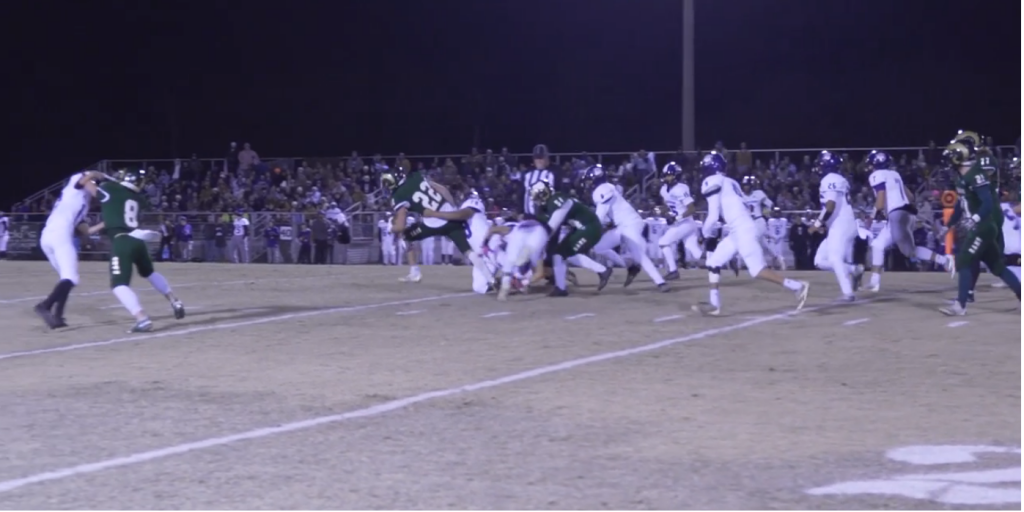 “I thought our defense played really well in the first half. Once our guys got settled in against some formations we hadn’t seen much, they really struggled to block us,” Vann said.

“Aspen, Ashdon, Ky, and Kittle all played well up front, and it changed the game for us defensively.”

In the second half, Sylvania’s offense relied on its run game to score three more touchdowns.

The Rams received the kickoff and Thomas burst through the line for a 72-yard score with 10:34 left in the third quarter and the 14-0 lead after Conner Andrade’s PAT.

On Geraldine’s next possession, Sylvania forced a three-and-out. The Rams offensive line began to control the game and took just a minute off the clock before Thomas again punched it in for the 21-0 lead after the PAT with 6:09 in the third quarter.

“This is three games in a row against playoff competition that we’ve been able to rush for more than 350 yards,” Vann said. “Teams have to put people in the box, and it opens up our pass game and play actions. We didn’t really have to throw it Friday night, but we will need to be able to throw it against [Piedmont],” Vann said.

On its next possession, Caleb Hall gained tough yards out of the backfield for Geraldine and moved the ball into Sylvania territory, but the Bulldogs failed to convert a fourth-and-long pass to turn the ball over on downs with 2:31 in the third quarter.

Sophomore back Aiden Parham picked up a 20-yard gain to move onto Geraldine’s side of the field, but Smith just missed Watkins on a fourth-and-long route to turn the ball over on downs.

Geraldine gained a little momentum on its possession when Colvin hit Cody Satterfield for the 52-yard strike-and-score across the middle. The PAT was good to make the score 21-7.

Geraldine forced a Sylvania punt to regain possession with 8:33 in the fourth quarter and moved the ball through the air with a flip pass to Satterfield and a pass to Hall to get to the Sylvania 12-yard line. On a key play in the game, Jonah Gurley broke up a pass to Elijah Schlageter and Thomas pulled in the interception to end the threat with 5:12 left in the game.

“We tackled better on the back end better than we had the previous two games, and that was huge for us,” Vann said.

Two plays later, Thomas put the game away with a 78-yard scamper for the score with 4:10 left. The Rams failed to convert on the 2-point attempt to leave the final score at 27-7.

Geraldine finishes the year at 9-4 in Bulldogs coach Michael Davis’ second season. The Rams move to 10-3 and will travel to take on 3A Region 6 rival Piedmont for an opportunity to play in the AHSAA Super 7 on Dec.1.