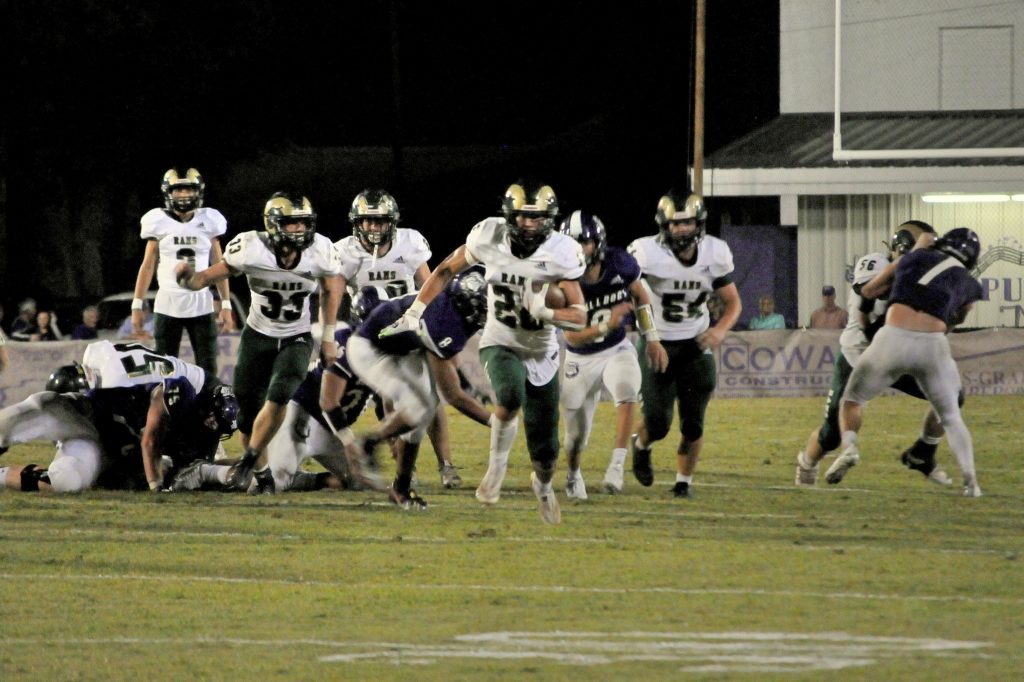 The Rams’ defense forced multiple turnovers and relied on their offense as Geraldine failed to capitalize on good field position in the 3A, Region 6 battle.

“On the whole, I was pleased with our effort, despite the injuries we had during the game. We had guys come in and step up, and I was proud of them,” said Sylvania Head Coach Tyler Vann.

Sylvania received the opening kickoff and moved down the field in six plays behind running backs Braiden Thomas and Aiden Parham and a 17-yard strike from Jaxon Smith to Josh Scott.

Parham went around left end from four yards out for the touchdown with 8:54 left in the first quarter. Sylvania’s two-point conversion attempt was no good.

“Jaxon did a good job managing the game, putting the ball where it needed to go, and making good decisions,” Vann said.

Geraldine went to work on its own 35-yard line after the kickoff and moved the ball behind a steady dose of running back Caleb Hall and direct snaps to Carlos Mann.

Sylvania’s defense pressured Bulldog quarterback Jaxon Colvin on third down, and he couldn’t connect with Mann in the end zone. Garcia kicked the field goal, and with 1:26 left in the first, Sylvania led 6-3.

On Sylvania’s next possession, the Bulldogs missed a key opportunity for an interception on a tipped pass from Smith that landed in receiver Roman McKeehan’s hands at the Geraldine 32-yard line.

Thomas then caught a pass and Parham moved a pile of Bulldogs to the 14-yard line before Smith connected with Scott in the corner of the end zone for the touchdown. Andrade’s PAT was good, and Sylvania led 13-10 with 4:00 left in the second quarter.

Vann was pleased with the Rams’ offensive line and running backs against the Bulldogs.

“I felt like early in the game [the offensive line] opened some holes for our backs; they’ve been playing well all year,” Vann said. “They were able to find the holes and gain yards down the field.”

Mann found room down the left side on the kickoff to give the Bulldogs good field position at their own 45-yard line, but Sylvania defensive back Griffin Haygood tipped a Colvin pass that Jonah Gurley caught for the interception. 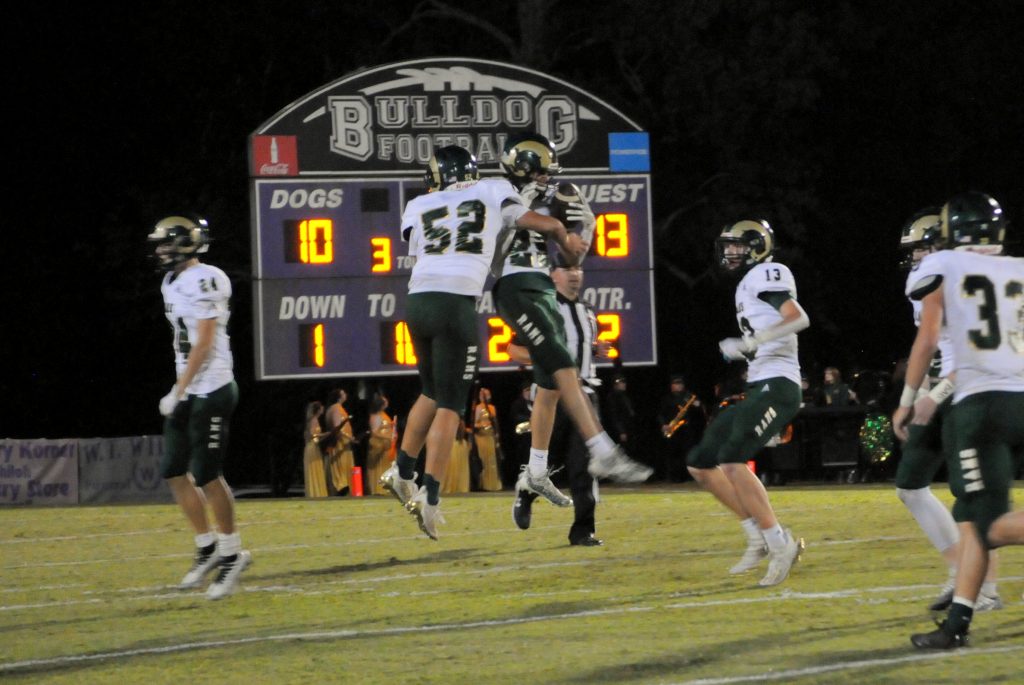 Parham took a short pass from Smith and followed his blockers for a 56-yard gain to the Geraldine 4-yard line. Thomas then capped the scoring drive, and after the PAT, the Rams held a 20-10 lead with 3:00 left in the half.

The Rams created another Geraldine turnover when Ryan Koger caused a fumble on a Colvin completion to Cody Satterfield. Geraldine’s defense returned the favor by forcing a turnover on downs and then moving the ball into field goal range, but Garcia’s attempt was blocked at the end of the half.

Vann believes the defense was key to the Rams’ win.

“Defensively, we played a good game. We made Geraldine drive the ball down the field [throughout the game], even though we had a couple of bad plays where we got beat deep. We played hard,” Vann said.

In the second half, Hall cut across the field on the kickoff for a long return to the Sylvania 18-yard line. Mann scored another Bulldog touchdown with 10:53 in the third quarter. The PAT was good, and Geraldine closed the score to 20-17.

On Sylvania’s next possession, Smith was injured on a quarterback run. Sophomore Griffin Turner entered the game and engineered a scoring drive that included completions to McKeehan and Scott to the Geraldine 8-yard line.

Parham finished the drive, and Andrade’s PAT was good for the 27-17 lead with 6:48 in the third quarter.

“I was proud of the way Turner came in after Jaxon went down with an injury and managed to drive us down the field for the score. That’s impressive as a sophomore coming in with a bad situation in a must-win region game for us. He did a good job,” Vann said.

On Geraldine’s next possession, after a couple of runs on direct snaps to Mann, Colvin dropped back and was hit by Ashdon Cooley as he released the pass. Scott snagged the interception and returned it 50 yards for the touchdown. The PAT was good and Sylvania held a 34-17 lead.

“I was proud of Josh [Scott], as well as [freshman] Travis Owens, who was our Defensive Player of the Week,” Vann said.

With 2:01 left in the third quarter, Mann again got open on a deep route and caught the throw from Colvin to move to the Sylvania 8-yard line. Mann scored off right end, and Garcia’s PAT made the score 34-24.

Early in the fourth quarter, the Bulldogs recovered a Thomas fumble. Colvin couldn’t connect with Mann in the end zone, and missed again on a fourth-down pass to turn the ball over to the Rams at the 28-yard line with 7:36 left.

Thomas fueled Sylvania’s last drive, and he outran a Bulldog defender for a 48-yard touchdown with just over 5:00 left.  Geraldine couldn’t move the ball on its final possession, and the game ended with the final score of 41-24.

Sylvania (3-1 overall, 2-1 region play) is scheduled for a matchup against Pisgah, who is ranked as the No. 4 team in 2A.

Geraldine is now 3-2 overall and also 2-1 in region play. The Bulldogs are off this week and host Ohatchee Sept. 30.