Skip to content
Home
/
Sports
/
Inside the Huddle-A Sneak Peek at the Collinsville Panthers
Main SliderSports August 8, 2016 by Southern Torch No comment(s)

COLLINSVILLE, Ala.— I went “Inside the Huddle” with the Collinsville Panthers on the first official day of football practice with helmets.  State laws say that a team has to wear helmets for two days of practice and then they can don the pads. Several parents and fans alike were there to watch the Panthers in action.  Excitement was in the air….football season is about to start.

This will be the third year that Collinsville has been in Class 2A.  In the first year, they went 4-6 and was one game from making the playoffs.  In their second year, the team went 6-4 and made the playoffs.  This year they are making progress and should be able to make it deep into the playoffs.  The team is very athletic and has experience at the skill positions. The line will be very young but has great potential. Depth will be an issue if they occur injuries.  For this season, they will run the spread offense and 3-4 (multiple) defense. 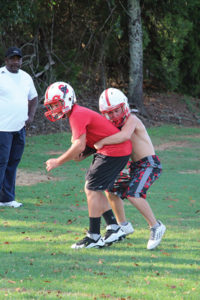 Coach Willingham stated that their “schedule was brutal but very exciting.” Following realignment, the Panthers will remain in Class 2A but will move to region six.  Several rivals will be back on the Panther schedule.  The Panthers will kick off their season against Crossville, for the first time since 2003. Crossville won the last competition 56-7. Collinsville and Crossville have met a total of 73 times on the field. This season the Panthers will once again face Sand Rock, whom they have not faced in several years.   Westbrook has been added back to the schedule and they will face a new opponent, the Asbury Rams.

Collinsville Varsity Football finished the 2015 season with a 6-5 record. The team was 3-3 in region play.  They lost to Randolph County in the first round of the playoffs.

The Collinsville Panthers practiced throughout the summer. Grades 7-12 practiced together.  The practice is comprised of field exercises and inside workouts.

The Collinsville Panthers have the determination and talent to succeed this year and should be able to go deep into the playoffs. Collinsville will definitely be a team to watch.