Skip to content
Home
/
Politics
/
Session 2015
/
Where Was Our Republican Leadership When We Needed Them?
Session 2015 December 16, 2014 by Southern Torch No comment(s)

The United States Congress didn’t do you any favors over the weekend! With the help of the Republican leadership in Congress, they passed a $1.1 trillion package of spending bills – including Obama’s amnesty program – which will fund the government through September 2015.

Congress nicknamed their cobbled together spending bill “CRomnibus”, which refers to the combination of the 2015 Omnibus Appropriations Bill (discretionary funding for much of the federal government) plus what is known as the Continuing Resolution or CR. The CR is a means of continuing to fund governmental agencies and departments at existing levels rather than passing a “real” budget.

This unrestrained spending bill is the lame-duck Congress’ last-ditch effort to stick it to the American people. Voters went to the polls in November and sent a very clear message. They voted against Obama’s policies. He even said he was not on the ballot, but his policies were. ObamaCare! Yet the first major action taken by the Congress after the election is to trample over the will of the voters by funding these programs.

Where were our leaders when we needed them? Where was Speaker John Boehner? Where was incoming Majority leader Mitch McConnell? They were working with Harry Reid, Nancy Pelosi and the president to get this travesty passed. Unfortunately, our Republican leadership seems so afraid they are going to be blamed for a government shutdown that they bent over backwards to do exactly what this President wanted. The House voted 219-206 and the Senate voting 56-40 for this legislation.

>>>Thankfully, we can be proud of Alabama’s two Senators – Jeff Sessions and Richard Shelby – for voting against this ill-conceived legislation, as did two members of our delegation in the House – Mo Brooks and Mike Rogers. They deserve our praise and thanks for taking a principled stand on this legislation. They held the line on spending even though they no doubt faced much pressure from House and Senate leadership to support the plan.

Senator Sessions called on Senate Majority Leader Harry Reid to allow for a vote on an amendment that would block the announced executive action by President Barack Obama on immigration policy. Sessions said, “we absolutely have a duty not to fund—a responsibility not to fund—programs that violate law, violate the Constitution, allow the President to eviscerate immigration law, and at the same time allow him to create an entirely new scheme of immigration law.” 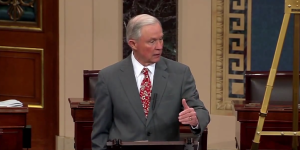 Thankfully, Americans have Senator Jeff Sessions watching their back. Senator Sessions has shown the type of leadership the Republican Party needs in Washington. Despite outside forces working against him, Sessions has remained adamantly against the president’s executive order on immigration, and has led the effort to prevent its implementation.

Senator Jeff Sessions has risen to the occasion more than once for Alabama and America. And as we watched the events of this past weekend unfold, we realized more and more how essential it is to have Sen. Sessions in the most important position of Chairman of the Budget Committee.  He has demonstrated that he is not afraid to take on the leadership in fighting for America, even though it could cause him to get edged out of this powerful Budget Committee Chairmanship.

Sessions is currently the ranking member of the Senate Budget Committee, and is next in line to become Chairman. However, Sen. Mike Enzi of Wyoming has seniority over Sessions and has indicated that he will attempt to push Sessions out as Chairman. All due respects to the good Senator from Wyoming, he needs to step aside and let Sen. Sessions lead! Conservatives all over America need principled Republicans like Sen. Sessions in leadership positions in Washington.

The National Review recently published an article advocating for Sen. Sessions. They wrote: “One of the best advocates Republicans and conservatives have had on Capitol Hill for years has been Senator Jeff Sessions of Alabama, now the ranking member of the Senate Budget Committee. It’s unfortunate that there’s a chance he will not become chairman of the Budget Committee next year. Far be it from us to question seniority, but Senator Sessions has had a great deal of practical experience and success on the Budget Committee. Senator Enzi has gotten his votes right, but Sessions has distinguished himself with his passion for key conservative priorities and has proven himself capable of communicating public arguments in their behalf”.

Thank you Sen. Jeff Sessions for your principled conservative leadership in Washington, D.C. We need you now more than ever!

By Bill Armistead, Chairman of the Alabama Republican Party