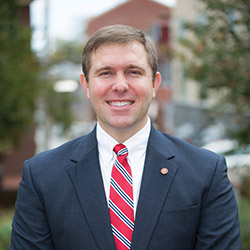 FORT PAYNE, Ala.— Jonathan McConnell, a candidate for U.S. Senate, hosted a meet and greet at the Fort Payne Western Sizzlin’ at 6 p.m. Wednesday night. McConnell is a Mobile native, and a former Infantry officer in the United States Marine Corps, where he served two deployments in Iraq. He is also a graduate of Auburn University, where he was elected as the Student Government Association President in 2004 and graduated with a degree in Business Administration.

McConnell made it clear that he’s running for office because he’s concerned about the direction our country is heading. His primary opponent, incumbent Senator Richard Shelby, has served for decades as a U.S. Senator representing Alabama. Despite the incumbent having over ten times the campaign funds of McConnell, according to the challenger, the race remains tight.

“We need bold conservative politicians in Washington D.C., not just career politicians who talk the talk not walk the walk,” McConnell said to the crowd. “You’ve all seen the commercials,” he stated further, “Richard Shelby fights Obama every single day, but I’d like for him to win just once.”

McConnell challenged the sitting senator to a debate this weekend, to which he declined. The debate will be held at Hoover Tactical Firearms in Birmingham at 5:45 p.m. on Thursday, February 18. McConnell plans on holding the debate with or without Senator Shelby.