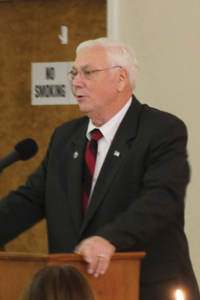 RAINSVILLE, Ala. — Rainsville citizen D.L. Stiefel has announced his candidacy for Rainsville City Council Place 2. He is a longtime resident of Rainsville and an active member of the community.

Stiefel moved to Rainsville with his parents in the early 1950’s as a child. He entered the U.S. Air Force in 1966. He spent four years serving during the Vietnam War. He moved back to Rainsville in 1971 where he’s lived ever since.

While Stiefel’s children were attending Plainview, he was the president of the PTO and an officer in the band boosters. Along with serving on school committees, he participated in the summer baseball program and officiating football games.

He spent over 20 years on the Board of Directors for Rainsville’s original civic center. He was also a member of Rainsville’s JC Club and the Lion’s Club, in which he was president for two years. He was appointed to the Rainsville Industrial Development Board in 1983 and now serves as the current chairman.

Stiefel has also owned and operated several small businesses in Rainsville. He was also on the Rainsville Chamber of Commerce Board of Directors from 2004 to 2007. He now serves on the board of directors as chairman for the Community Action Agency in Rainsville.

According to Stiefel, his business and management experience would make him an asset to the City of Rainsville. He also has an interest in budget planning and bringing jobs to the area by the means of industrial recruitment.

“From my background in business management and consulting, I have an interest and wealth of experience in long-term budget planning, which could help with our current budgetary issues. I’ve managed multi-million dollar companies and have a lot of budget planning experience,” Stiefel said.

“Being chairman of the Rainsville Industrial Development board has also given me experience in the area of industrial recruitment, and I’ll work hard to bring more businesses to our community,” Stiefel added.

When asked, Stiefel also expressed support for required meeting attendance for city councilmen. The issue had been brought up by a concerned citizen at the last regularly scheduled council meeting.

“All these civic organizations and volunteer groups work and don’t get paid for it. City employees must show up or they don’t get paid. The city council should be no different,” Stiefel said.

“I don’t know what the requirement should be exactly, and I know there is a grey area when things come up, but there should be some type of requirement,” said Stiefel.

According to Stiefel, his motivation to run for office comes from his desire to serve others. Not only has he served in numerous volunteer roles in the Rainsville community, he has also served in an executive role in many of these organizations.

“Serving in the Air Force is where I developed such a strong interest in serving other people,” Stiefel said, “Since returning to Rainsville, most of my free time has been spent serving others in some capacity.”

Stiefel will be on the ballot on Tuesday, August 23 in the municipal elections. He’ll be running against opponent Bejan Taheri for the open council seat.