FORT PAYNE, Ala. — (Scroll down for Video) At this morning's meeting of the DeKalb County Republican Breakfast Club, much of the conversation among local Republicans revolved around the the recent challenge of Michael Edmondson's appearance on the Republican ballot for Sheriff. The primary will be decided on June 5th, 2018.

While qualifying for the 2018 political season just ended yesterday, the DeKalb County Sheriff's race has already been the cause of contention. On Thursday, February 1, the Republican Executive Committee convened to review the seven letters challenging Edmondson's qualification to appear on the local ballot.

At this morning's meeting, one challenger stood up to face Edmondson directly: Lester Black. Black is a longtime Republican and currently running for DeKalb County Commission, Place 4.

Black then approached Probate Judge Ronnie Osborn and said, "I run against you 12 years ago, while you were sitting Judge. Was there any time we weren't friends?"

"Not at all," Osborn responded.

"It tore my heart out when I lost to you, but I still voted Republican. We've got three (Republican) circuit judge candidates here today. Two of them won't win. I've got one I'm going to vote for, and then I'll vote for who wins the primary. I'm not going to go around spreading rumors that I'm going to vote for a Democrat," Black stated.

"The reason I'm standing up here today, I really wanted that job 12 years ago, but running for commissioner this time.... it wasn't me. I was talked in to running for commissioner. But if the people of this county elects me for that job, I promise you, I will do a good job of it, but that's not what I wanted to tell you," said Black.

"Over two-thirds of the people that came to me wanting me to run, and I thought the issue would be roads, but it was the Sheriff's Office. Mayors, former county commission members, a host of municipal police officers, thought that I would help them out (with the issues at the Sheriff's Office), and I'll do the best job I can," he said.

"The reason I'm standing up here today, is within two hours (of qualifying), our newest Republican member (Edmondson) starts attacking my pride and accusing me.... I was following the DeKalb County Republican by-laws. In everything I did. I did not know they were having that meeting..... I was not informed of us having a meeting. I was called later, and informed that the vote was 3-1," Black said.

"I was asked if I wanted to appeal it, and I said, 'no, I was (one of) the ones who voted for the qualifying committee, and I stand by what they believe, and that would have been the end of it. But my character was attacked, it was said I was sheepish (and) a coward. That's why I'm here today," stated Black.

"(Nick Welden) had nothing to do with writing that letter. If he would not have been running for sheriff, I would have still wrote the letter. And him telling me, two people that has never broke the law, we have to disassociate ourselves with one another; I feel like that's a violation of a person wearing a badge to tell people that has never broken a law, is not only unethical, but I think that's a violation of civil rights," Black said.

"I'm not going in to what was in the letter, but I'm going to give it to the Southern Torch, so you can all read it," said Black.

After the meeting, Black gave us his letter submitted to the qualifying committee (full letter below). After Black concluded his remarks, Jack Stiefel gave a chance for further comments from the crowd. Edmondson, who was present at the breakfast, offered no response.

In the Summer of 2012, while my brother was in the hospital, his riding lawn mower, garden tiller, chainsaws, welder, and all of his shop equipment and wrenches as well as many items in the house was stolen.

A neighbor seen a truck and trailer with his belongings going down the road and followed at a distance to see where it was going and seen him pull in to his main shop. After my brother was released from the hospital, we (myself, Melvin, Harvey, Dean, Kevin, Brent, and Johnny Black) went to Sheriff Jimmy Harris' office.

We told him where the stolen items were at. The sheriff told us he would send deputies to this place at 6 am the next day. That was in 2012. No deputy was ever sent.

A week or so later his pick-up truck was stolen by the same man and to another man living in Jackson County. The Jackson County Sheriff got his truck back for him.

About a week after we talked with the sheriff for the first time, a person watching this man's shop for us called to say some of the items were outside of the shop. I left work, went there, and got the riding law mower, garden tiller, and chainsaw since it was outside of the building.

At this time we left, we went back to the sheriff's office and were told the Sheriff or Deputy Brown, who was assigned our case would call as soon as possible. We waited about 45 minutes, and neither one ever called us back to this day.

We were never given a reason why later phone calls were not returned. I can only think because this man was a strong Democrats and we were all Republicans. I truly felt it was political.

In March of 2017, the DeKalb County Executive committee voted not to allow party switching till after the 2018 Elections cycle. In July of 2017, Michael Edmondson called me about running on the the Republican ticket for Sheriff. I told him I was not on the qualifying committee this year. He ask who was and I told him and gave him their phone numbers.

Michael was offered a job with the District Attorney's office. After several months of needing to get things in order before he quit, he declined the offer. Seems he must be comfortable with where he is working.

In closing, it would not be in the interest of the Republican Party to have the first Sheriff elected as a Republican in years here, to have to resign because of his association with his former-boss, Jimmy Harris.

Letter submitted to the qualification committee: 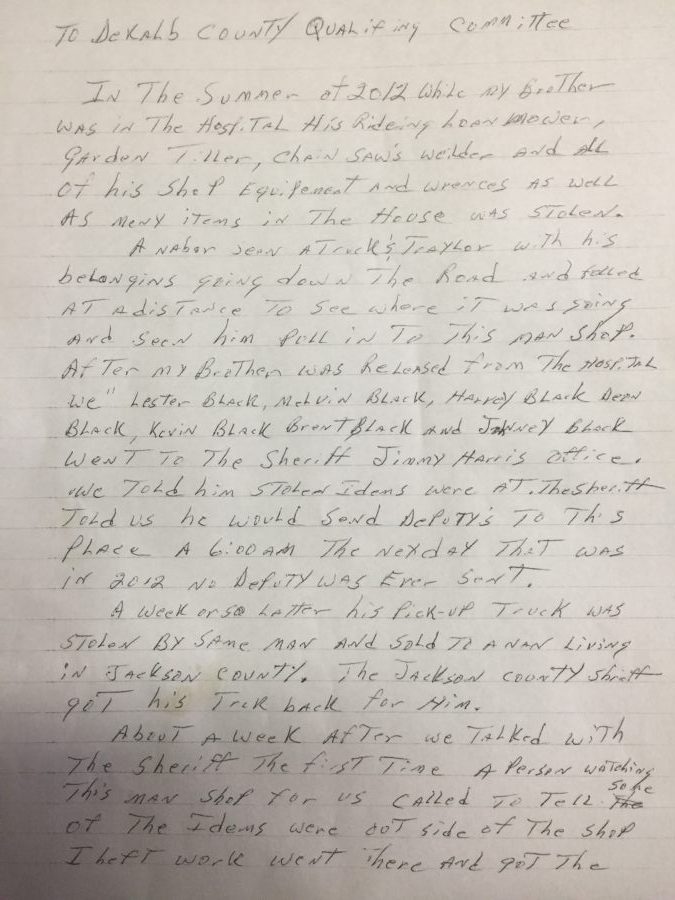 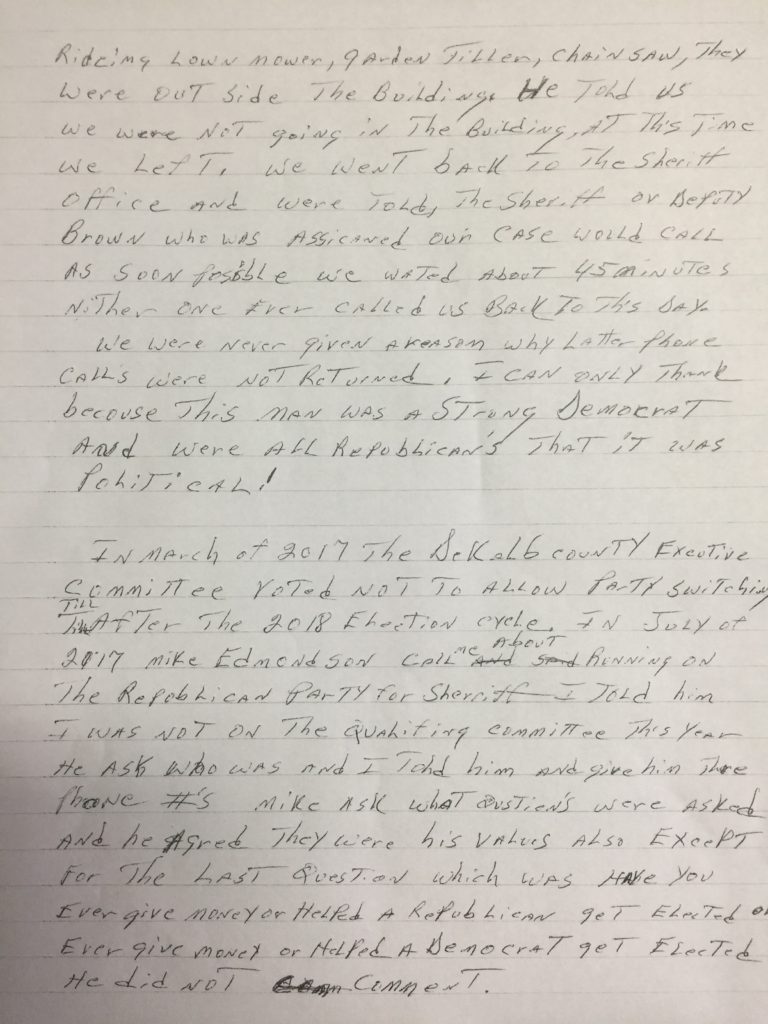 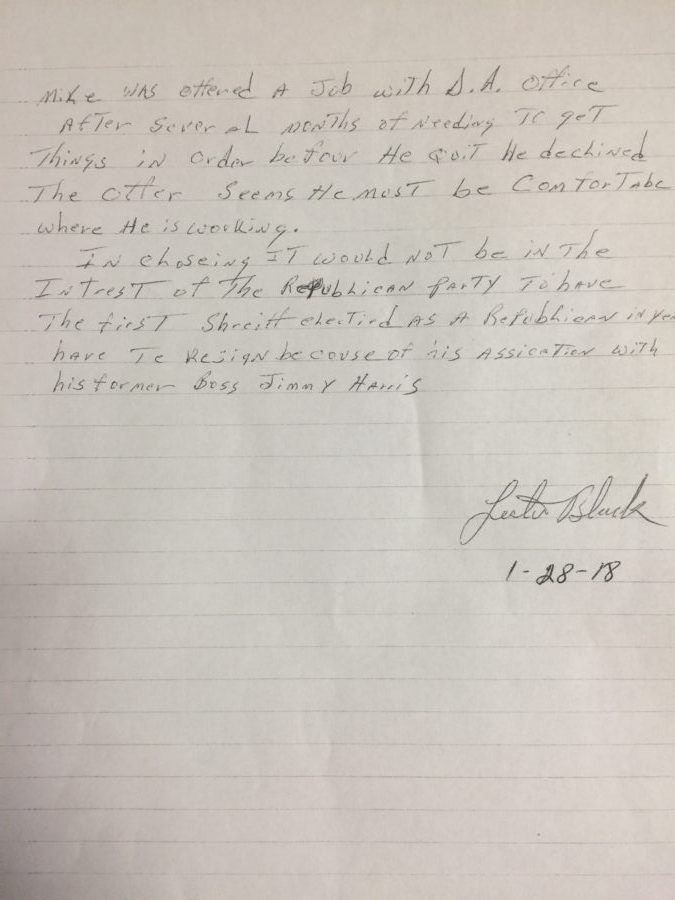