According to the task force, human trafficking is the second largest criminal industry in the world, and it's estimated that 27 million people live in slavery in the world today; the most in human history. The average age of a human trafficking victim is 12 years old. Although 79 percent of victims are female, the number of males exploited is rapidly rising.

I-20, I-85, I-10, and I-65, all interstates that pass through Alabama, are considered major corridors for human trafficking. We also live in close proximity to six human trafficking hotspots: Nashville, Memphis, Chattanooga, Knoxville, Atlanta, and Birmingham.

While I-59 passes through DeKalb County and nearby Etowah County, it was not mentioned specifically, however, Pat McCay, Secretary of the Task Force said that, "we have not done the research that's not necessary yet to put it on our media. Any interstate, truly is a corridor." 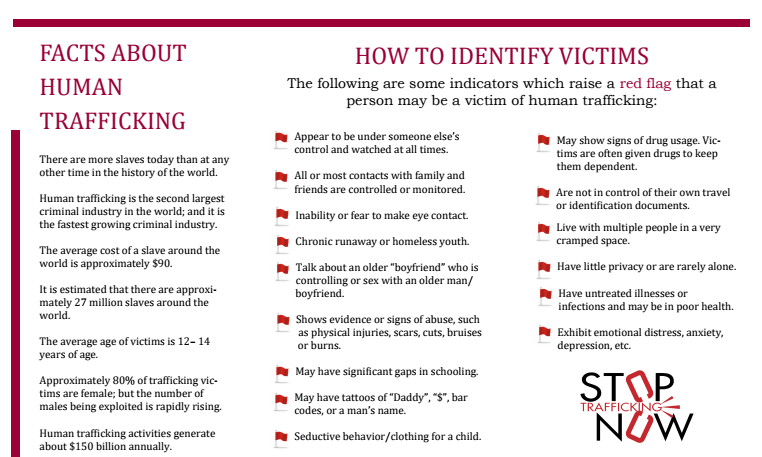 "(The interstates) allow these bad people to come out of cities to our towns quickly, they can come in, and set up their internet presence before they get there, and if they see that police or the community is watching them, or nobody is buying, they can get out of town fast," said McCay.

The information provided from the task force describes how traffickers operate. Trafficking victims are usually displaced, homeless, physically or sexually abused victims, disabled individuals, LGBTQ, or dependent children, but anyone can be a victim. The victims are usually "trafficked" by force, fraud, or coercion.

The "pimps" usually travel to different locations to sell out the victims for sex. Social media and websites such as Backpage.com, Craigslist, Instagram, Snapchat, and Twitter are used to find potential "buyers" for sex.

Some of the strongest signs of a human trafficking victim are: the victim seems controlled by another person, the child exhibits signs of abuse (injuries, bruises), has a heightened sense of fear or distrust, child seems fearful anxious, depressed, submissive, child is a chronic runaway or homeless, the child has significant gaps in schooling, the child is with an older, "boyfriend," or has a tattoo or brand.

The task force has conducted 82 presentations on the subject so far, and is hosting an awareness event in Huntsville on January 20th and in Jackson County on January 23rd.

Nick Welden, President of the DeKalb County Chiefs of Police Association, has been in touch with McCay to pass the crucial training along to law enforcement here in DeKalb.

"We want to bring this training to DeKalb to update and educate our officers," Valley Head Police Chief Nick Welden said. "As president of the association, I believe it's valuable information and much needed in our area due to a major interstate passing through. We are scheduling training dates so all departments will have the opportunity to learn more on this crime."

"We feel like the smaller towns don't get the opportunities to train their officers as much," explained McCay. "Some do, some don't; it just depends on city budgets. We don't charge anything. We come over and do it free of charge. We want to offer whatever we can so they know what to look for."

"They could do a routine traffic stop. It could be a broken tail light, an expired tag, etc. And if they don't know what to look for within the inside of the car, they could let traffickers just go on by with a warning ticket, or a citation, and it could make all the difference if they know what to look for," she said.

In addition, Governor Ivey will be signing a statewide Proclamation in observance of National Human Trafficking Awareness Month.

The resolution was signed in April 2014 making the Alabama Human Trafficking Task Force a reality. The Task Force meets once each quarter at the Alabama State House.

Meetings are open to the public.