RAINSVILLE, Ala. — Thomas Hartline, a senior at Plainview High School, defended his first place victory in last years’ State SkillsUSA First Aid-CPR competition with a gold medal-win for the second year in a row as a representative of DeKalb County Technical School.

Hartline’s victory here in Alabama now allows him to move onto the nationals. 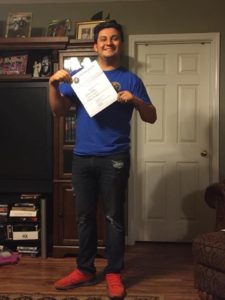 Hartline has also had a stellar senior year. He became the first Medical Science student to be accepted into Northeast Alabama Community College’s nursing program prior to his own high school graduation. He has participated in the DeKalb County Career Tech Dual Enrollment Program. He plans to become a nurse practitioner.

Thomas has always been one to blaze his own trails and help others. He has helped paint churches in Guatemala, been instrumental in the building of special needs playgrounds in Rainsville, helped in Operation Christmas Child, and assisted in ministry to children in the foothills of Kentucky.

“Life hasn’t always treated Thomas fair, but he has never let that slow him down,” said his father, Gary Hartline. “No matter what has come his way, he has faced it head on. He has always wanted to help people.”

All of us here at The Southern Torch are proud of Thomas Hartline and his amazing accomplishments and wish him the best of luck in his future endeavors.