Skip to content
Home
/
Community
/
Growing up in the theatre with Johnny Brewer
Community December 11, 2015 by Southern Torch No comment(s) 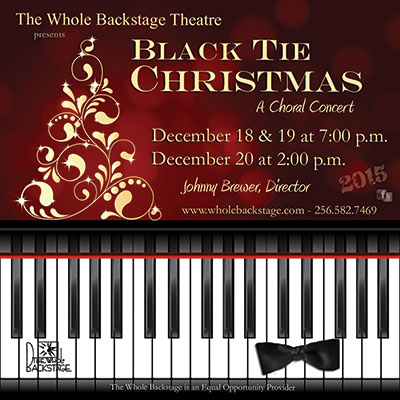 As with any production, there are familiar faces as well as new ones. But in Black Tie Broadway, there is a unique set in the cast who grew up in the theatre, specifically, with Director Johnny Brewer. According to these seasoned performers, Brewer taught them more than just where to stand onstage.

Shelby Cochran of Albertville described her theatre experience, “My first shows with Johnny were Cinderella (first grade-I was a mouse) and Wizard of Oz (second grade-I was a munchkin and flying monkey).  I still remember how great he was with the young performers. He always made us feel like true actors and not just cute kids on stage for comic relief. Black Tie Broadway will be my first show with him in a while, and he’s still so professional and prepared. He always has a plan of attack for the show he’s directing and even more backup plans for mishaps along the way. He gives so much of his time and effort to make each show come alive, and we have one of the best theatre programs in our region because of that dedication. This organization is all-volunteer, but people like Johnny Brewer are the ones who make us feel like paid actors.

I went on to work with Johnny on other projects outside of the theatre. He helped me stage my talent before competing, and eventually winning, Miss Marshall County. Later that year, he assisted me in a full dress rehearsal for all elements of competition before Miss Alabama Pageant. He spent day and night setting up an open rehearsal to run lights, sound, and take notes to give me a little boost of confidence before walking on the “big pageant stage.” Growing up in a community where we have such high standards for the Arts has truly molded and shaped me into the performer I am today. If it weren’t for the influential people in my life, like Johnny Brewer, I would not have made it to Top 12 at Miss Alabama. He was always willing to go above and beyond to help me whether it be his expertise in speech for interview preparations or just sending an encouraging text. I don’t have to be in a show with him to find him giving of his time, talent, and eye for the stage to help me in any of my random projects. He certainly is a hidden gem.”  Shelby is now a University of Alabama graduate with Masters degree in Aerospace Engineering.

Stephanie Brown of Albertville, now an attorney in Birmingham, says,  “I have had the honor of working with Mr. Brewer many times over the years. Anyone who has seen any production he has touched can see that he is incredibly talented and passionate about the Arts.  The first show I ever participated in was The Wizard of Oz in 2000 under the direction of Mr. Brewer.  He taught me so much about the theatre and truly ignited my love for performing.  However, what I carry with me most is his passion for people.  He truly loves others and shows it in every way.  He is always compassionate and supportive both onstage and off.  I feel blessed to have been able to work with him, and even more so to call him my friend.”

Miriam Richey of Albertville, Music teacher in Boaz City Schools, “One of my first theatrical experiences was with Johnny in 1992 when he cast me as Grace Ferrell in “Annie”.  I was a young adult and new to the teaching field at that time. I learned from Mr. Brewer to look for the hidden potential in people.  Sometimes, simply giving someone a small chance is all one needs to see greatness come shining through! Theatre is a big part of my life---I’m so glad someone took a chance on me--I hope to give that same chance to others as well.”

Sarah Quinn Richey of Albertville, and high school student, explains, “I started theatre as a 5 year old when Mr. Brewer cast me as Gretl, the youngest Von Trapp child, in the Sound of Music at The Whole Backstage. One of the greatest things that Mr. Brewer taught me is to keep the “magic” of the show alive. Through the “magic” of theatre, the show takes the audience away from everyday worries and draws them into a magical atmosphere.  Somehow, Mr. Brewer has a special way of always believing in people and convincing them to have confidence in themselves.

Kate Bilke Griffith of Guntersville, formerly of Grant says, “The WBS has been a second home for me for over 12 years. The lessons that I’ve learned have been lessons that have shaped the person I am today, and the people that I have met are most certainly more family than just friends. My very first show was with Johnny Brewer, and he encouraged me to have confidence in myself and to develop my own abilities. Through about 10 years working with him and learning about theatre, I have also grown to value of serving in a non-profit organization, Leaders who have shaped this theatre from the beginning years, like our Director Johnny Brewer, and the late Dot Moore, Founder of The Whole Backstage, are definitely role models for me. Recently, I was elected as Secretary to the WBS Board of Directors, as I step forward as a leader in our organization, I can have a similar impact on those involved.”

Megan Mitchell of Rainsville reflects that, “Through productions under the direction of Johnny Brewer, I have grown as a performer, gained confidence, learned the value of teamwork and have a clearer view of how it takes many individual talents to bring together a successful show. As a participant and winner in the Distinguished Young Women’s Scholarship Program, I realized how much I had learned from him about stage presence and the importance of rehearsal. He believes in people and has a special way to bring out their best. During the 10 years of working with Mr. Brewer, he has encouraged me, and found ways to help me develop leadership skills. In Black Tie Broadway, he gave me the responsibility to choreograph a few of the musical numbers. I loved that challenge, and the dancers really did a great job executing my choreography!”

Jackson and Sylvie Gray, brother and sister duo from Boaz, explained, “Our first of many shows with Mr. Johnny was in 2009, The Wizard of Oz. we always learn something new about ourselves during the time from rehearsals through performance. He helps the cast see the value of every person in his shows, and how to see your own potential, too.  He is a very positive role model in our lives and for many others.”

Another unique feature of Black Tie Broadway says, Katherine Brewer, Assistant to the Director, “It is great to see talented families involved together in venture that they enjoy. In this cast there are numerous family ties:

The Whole Backstage in Guntersville will present Black-Tie Broadway-A Musical Revue, directed and put together by Johnny Brewer, the talented cast of more than 70 singers and dancers will bring music and memories to life as they perform classic show tunes mixed with contemporary selections currently playing onstage in New York City. Brewer described this show, “It is a collection of Broadway music for all generations. It is a unique production that features some of the greatest vocalists in our area. As I conduct and listen during the rehearsals, I am in awe of the professional level of talent and skill in this cast. Singing, dancing, some classic characters, and children’s spotlights will create a memorable and enjoyable family friendly entertaining event.”

Tickets for Black-Tie Broadway are on sale now! This production will entertain and touch an audience of all ages. Evening performances are October 15, 16, 17, at 7:00 p.m., with Sunday Matinee on October 18 at 2:00 p.m. Adult tickets are $18 each with senior and student tickets $16 each. Tickets may be purchased online at www.wholebackstage.com or by calling the WBS office at 256.582.7469, or by visiting the office at 1120 Rayburn Avenue in Guntersville during business hours 9:00 a.m. to 3:00 p.m., Monday through Friday.